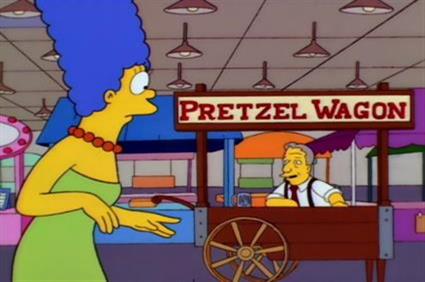 Marge Simpson is one of Matt Groening's most popular characters. She's known for being a hard-working mum with a lot to put up with, a good citizen and somebody who tries to do the right thing.

She isn't known as being a high-rolling business woman, yet in the episode of The Simpsons entitled The Twisted World of Marge Simpson, she decides to become a franchisee for a small pretzel-selling concern and the rest of the episode details her business' inevitable demise.

Although her story is an exaggerated one, primarily meant to raise a laugh, a lot of the reasons she fails are replicated by real-world franchisees.

1. She didn't have enough capital to start a business

Marge isn't a rich woman, but you don't need to be rich to start a franchise.

You do, however, need to have sufficient capital to buy the business, fund initial outlay on such things as stock or equipment and you must be able to cover any early losses while you wait for the business to find its feet. Poor Marge didn't have this kind of a financial cushion, which contributed to her failure.

2. She wasn't a good manager

A franchise is, above all else, a business. In business, it's important to have a clear vision and to understand ways in which you can achieve the goals set out in that vision.

Sadly, Marge has no real idea of what to aim for or how to go about it. One major example of her incompetence as a manager is the fiasco that arose because she decided to have 'free pretzel' vouchers printed. Instead of putting a limit on how many each customer could have, she simply allowed unlimited claims on the promotion, causing her to have to give away $300 worth of pretzels to one customer. Unfortunately, small businesses have fallen foul of this kind of promotion in real life as well.

3. She wasn't a good fit for the business

A large part of making a success of a franchise is finding the right one for you. At the franchise fair, Marge made a snap decision to buy the one she ended up with, primarily based on the quality of the product sample, and the business just wasn't a good fit.

She knew nothing about how the concern had fared or what was involved in running it, having had no time to investigate it or even to look at its financial records. She didn't have the right premises to prepare the product or to store it, resulting in a terrible mess in her relatively small kitchen and unsuitable conditions in her garage.

Marge had no experience of direct sales, either, resulting in the necessity to improvise her sales techniques and leading to her becoming demoralised when things went wrong.

4. She wasn't aware of the opposition

Research is a very important aspect of taking on a franchise because it enables the franchisee to find out about the market for their product, the conditions of the franchise and such things as the nature and amount of competition.

Had Marge been able to research her chosen franchise, she might have discovered that there was a larger concern within the same area that would be such an effective competitor that it would leave very little available custom.

This lack of preparation led to her involvement with unsuitable business partners and opposition from equally dangerous competitors.

5. Her marketing and publicity failed

With only a very poor video presentation for advice and guidance, Marge had very little idea about marketing her product - as demonstrated by the vouchers - and resorted to methods such as placing a giant pretzel on the car and driving around in the hope of attracting custom.

Although a product giveaway at a large sporting event could have proven to be a good strategy, had she had the capital to support it, this tactic backfired when the crowd used the pretzels as missiles, resulting in unfavourable publicity and no new customers. As unlikely a scenario as this was, it is only an exaggerated version of ways in which ill-planned marketing can end up being a massive waste of money.

Marge's cautionary tale has a happy ending as her shady partners, Fat Tony's Mafia, and her business rival's Yakuza partners fight it out on her lawn, while she counts her blessings inside the house, safe with her family. But the bigger picture here is that no business should be undertaken lightly and due diligence must be observed for the franchisee to have the best possible chance of success.