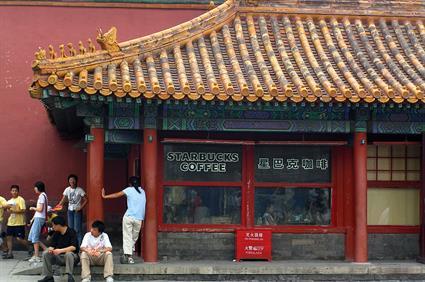 From outlets in decommissioned planes and active military bases to restaurants behind mosques, in churches and imperial palaces, fast food franchises are located in some weird and wonderful places around the world.

We take a look at five of the strangest locations.

McDonalds franchises crop up in some pretty wacky locations, but this one possibly wins first prize. Voted the coolest McDonalds in the world in 2013, it is housed in a decommissioned Douglas DC3 plane. The seats and tables are lined along the edges of the plane and customers can even view the cockpit after their meal.

The plane was built in 1943 and used by South Pacific Airlines from 1961 to 1966, before being used by Fieldair Holdings for aerial topdressing and then decommissioned in 1984.

Starbucks had become massively popular in the U.S. by the end of the 1990s and was gradually spreading its way around the globe, including the Far East. In 2000 a franchise opened in the Forbidden City, at the invitation of the imperial palace’s Chinese managers.

Despite the Forbidden City’s esteemed place in Chinese culture, the opening of an American coffeehouse chain didn’t cause much concern for several years. In 2007, however, Chinese newscaster and blogger Rui Chenggang called for a petition for its removal, saying that it “tramples over Chinese culture”. It duly closed, before a new coffee shop sprung up in the same location.

Subway has around 35,000 franchises around the world, including more than a few in odd locations. But perhaps one of the weirdest is the Subway located in the True Bethel Baptist Church of Buffalo, New York State.

The restaurant is just one enterprise supported by the pastor as part of the church’s job skills programme, with others, also based at the church, including a book shop and silkscreen company. With the church’s location in Buffalo’s deprived east side, it is a project that is well-supported, and the Subway is one of the best performing in the wider area.

Fast food restaurants were banned at U.S. military bases in Afghanistan in 2010, but the ban was subsequently lifted and Pizza Hut opened its doors once more at Camp Phoenix on the outskirts of the city. The franchise is just one of various fast food joints to reopen in the country, with others, including Burger King and KFC, at Bagram Air Field and Kandahar Air Field.

The outlets are massively popular, with long queues, and supply problems have meant they can run out of ingredients quickly. Though the bans have been lifted, base commanders have the final say over whether a franchise is allowable.

And so we come full circle back to McDonalds again. The fast food giant has expanded into all corners of the globe, including areas previously closed to the West’s influence. And on Bahrain’s King Faisal Causeway, which connects the ancient kingdom’s islands to Saudi Arabia, there is even a restaurant directly behind a mosque.

The outlet is pointed out to travellers by a helpful sign written in both English and Arabic. All McDonalds in the Middle East, including this one, serve only halal beef.