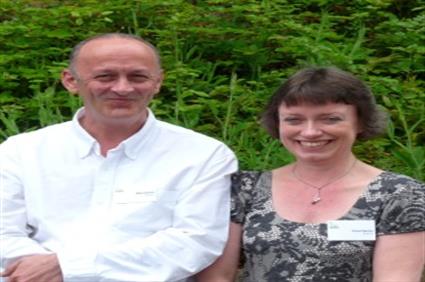 In recognition of the Original Poster Company's 20th anniversary, we present testimonials from two of the greeting card franchise's success stories who are preparing to move ahead within the business.

Mike Davies who, with his wife Fiona, is standing down as a Franchisee in Brighton covering Sussex:

"I joined OPC in April 2006 after working for many years in the automotive and aerospace industries.

After taking voluntary redundancy I was keen to become self employed and was attracted to OPC as their franchise network offered the challenge of working for myself whilst having the support and guidance of a successful company. I could also see that there would always be a demand for good quality and popular greeting cards which this franchise provided.

My wife soon joined me in this venture and, although we had no experience in greeting cards or in running our own business, OPC provided comprehensive training and advice.

There were initial training sessions at Head Office and we have continuous support from the designated Business Development Manager who is always there to answer any queries and offer any help or advice we might need.

The Brighton franchise covers a large geographical area stretching across most of East Sussex and some of West Sussex. The area includes not only the bustling seaside towns of Eastbourne, Brighton and Hove but also picturesque rural towns and villages such as Haywards Heath, Ditchling, Glynde and Hurstpierpoint to name but a few.

These communities provide a varied range of shops and customers within a scenic landscape which makes our journeys enjoyable.

The type of stores we deal with range from many busy post offices, convenience stores such as Londis and Costcutter and also some dedicated card shops. We also visit other types of shop e.g. tea shops, florists, pet shops, garden centres.

There is huge potential in the area and this is illustrated by the large National Accounts potential list which OPC regularly updates.

Since joining OPC we have purchased another territory due to the success of our Brighton territory experience. In order to progress our new territory to its full potential and provide us with new challenges, it is with regret that we have to sell the Brighton franchise.

We will be moving house and our new home will be within the new territory. We will, however, be sad to leave the many customer friends we have made over the years.

We have developed the franchise from when it was first purchased. Stands and spinners have been upgraded and card ranges increased in existing sites. It is important to always be on the lookout for new opportunities within existing stores and to work with the storeowners to achieve maximum potential and sales.

We have gained numerous new sites since taking on the Brighton territory and have built it up to be one of the leading OPC franchise territories in the whole of the UK . We have built up good relationships with our customers who are loyal and often recommend us to other family members or friends as a result of the excellent product and the standard of service we provide.

The purchaser of this territory will immediately gain a good income and have the opportunity to continuously improve a well established franchise."

Don’t miss the OPC Team at this year’s Franchise Shows!

Remember talking to us does not commit you to anything. We look forward to hearing from you.