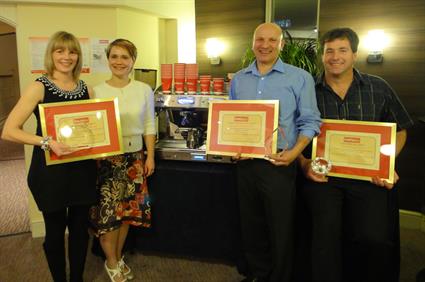 At the Cafe2U National Leadership Conference, held in Bristol last weekend, the Cafe2U Franchise Partner of 2011 was announced and awarded a fantastic holiday in Rome.

Laura Macrae from Cafe2U Aberdeen West had a superb 2011 with record sales and being highly commended at the Beverage Standards Awards and, to add the sprinkles on top, she has now been awarded Franchise Partner of the Year 2011!

Laura was extremely happy to be recognised for the quality of her work at the cafe franchise: “I continually check that the coffee I am serving is of the best standard and sometimes I can re-calibrate my coffee grinder 10 times a day! I love my work and I am really lucky to be supported by my wonderful husband Stuart – it is so important to have the backing of your family when you start your own business.”

The world’s biggest mobile coffee franchise which now has over 50 franchise partners in the UK also recognised the achievements of several of their network during the awards dinner and ceremony:

The Leadership Conference, attended by Cafe2U franchise partners, staff and guest speakers, enjoyed a motivational and eye-opening talk from keynote speaker and UK author Mike Heppell on how to free up an hour of your time each day.

The weekend also included some business development plans for 2012 and a Barista Jam where the Cafe2U baristas tried to beat Jon, Cafe2U’s head of training and coffee guru, with a ‘latte art-off’!

Cafe2U’s UK Managing Director, Tom Acland thinks that these annual conferences are extremely important for the company and moving all of its franchise partners forwards together: “This year our conference theme was geared towards ‘working smarter’. As we move our global brand forwards, we must all work towards consistency, and higher brand standards, allowing us to grow and develop in the most sustainable way.”

“The Franchise Partner of the Year Award Programme recognises those who have been both active within our community and have consistently delivered a high quality in both product and service to their customers. To achieve the distinction of being awarded the National Franchise Partner of the Year is recognition of Laura’s high standards of excellence.”