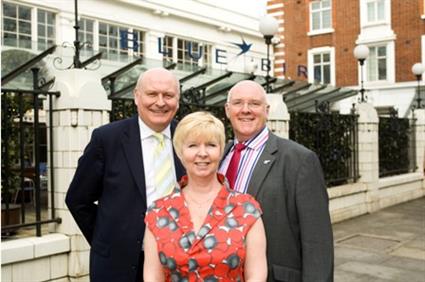 Bluebird Care held a celebratory lunch at the Bluebird Restaurant in London on 24th February, for all the people that have been instrumental to the care at home company’s success.

Guests included the president of the British Franchise Association, Sir Bernard Ingham, head of policy for the UK Home Care Association, Mr Colin Angel, head of franchising for both NatWest and HSBC Banks, as well as the company’s designers, solicitors and their local MP Caroline Dinenage.

The Bluebird Care brand name was created around the fascinating story of Donald Campbell’s record breaking ‘Bluebird Car’. The revolutionary Bluebird Car achieved fastest car in the world status in 1960.

Managing director of Bluebird Care, Paul Tarsey’s family were friends with the Campbell’s and as a youngster Tarsey was gripped by the driver’s determination and ultimate endeavour to succeed. Tarsey considered Donald Campbell to be a true sporting hero and when he set up his care service franchise company with his wife Lisa in 2004, there was only one name it could be. And so Bluebird Care was born, and where better to celebrate the company’s success than in the very place that the car was built on the King’s Road in Chelsea – the Bluebird restaurant.