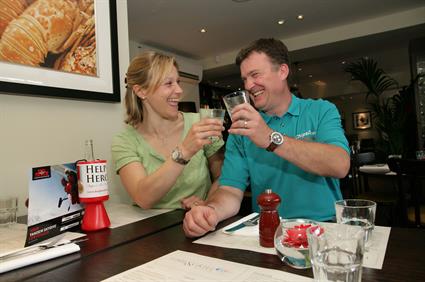 Lunch with the lovely Vicki Butler-Henderson, glamorous presenter of car enthusiasts’ programme Fifth Gear, is merely the stuff of fantasy for her many admirers. But for ChipsAway franchise owner Steve Hancock, a ‘date’ with Vicki became a dream come true after he raised more than £1,000 for Help for Heroes.

Vicki – who has been the face of the auto repair franchise for the past year – pledged to share a special slap-up lunch with a top fundraiser for ChipsAway’s chosen charity, Help for Heroes. Steve and Vicki went for lunch at the Fish & Grill restaurant in Putney, London.

Steve, who is a ChipsAway franchisee in the Daventry area, reached his £1,000 target by taking part in a skydive with the Red Devils. He also placed Help for Heroes collection tins in his local pub, on his van and in his wife’s hair salon and donated £5 from every repair he did for a month. Steve is continuing to raise money for Help for Heroes to coincide with ChipsAway’s continued support of the charity.

Steve comments: “Going for lunch with Vicki was a real treat, we had a great time. I have always been a car enthusiast and have watched Fifth Gear for years so it was lovely to meet Vicki in person.

“I thoroughly enjoyed the skydive also – I can’t wait to do another one. I’m very passionate about Help for Heroes as a charity – men and women in the forces are willing to risk their lives for us so I think we should do our bit to repay them whichever way we can. This is a further reason why I want to do another skydive and continue to raise money for Help for Heroes.”

Vicki Butler-Henderson said: “Help for Heroes is a fantastic cause. I am delighted to have been able to support ChipsAway in raising funds for the charity and thoroughly enjoyed my special ‘date’ with Steve.”

ChipsAway has so far raised around £15,000 for Help for Heroes and presented a cheque to Dawn Turner, Help for Heroes volunteer and West Midlands County Coordinator, at the company’s recent Annual National Conference.