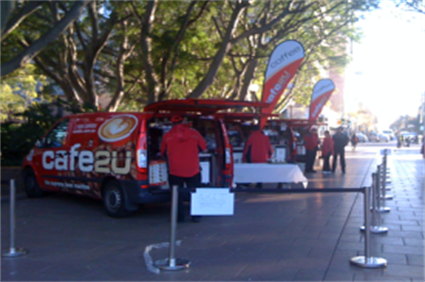 On Saturday 15th January 2011, during its National Leadership Conference on the Gold Coast, Cafe2U announced its ‘2010 Franchisee of Year’.

Earlier in the night Andrew and Mandy won the ‘Western Australian Franchisee of the Year Award’ which put them in the running for the National Award.

“With so many high performing franchisees operating within Cafe2U, we were absolutely thrilled to win the ‘Western Australian Franchisee of the Year’ Award.  We never thought for a second that we would be in the running for the National Award too!  It is such a shock ...  I am absolutely speechless!” said a stunned Andrew Lynch upon accepting the award.

In just 16 months, Andrew and Mandy Lynch have taken their Cafe2U business from a start-up business to Cafe2U’s best in 2010, and are now looking to establish a second franchise in 2011 to better service their army of loyal customers.

During the award ceremony, Derek Black, the Managing Director of Cafe2U stated “The Cafe2U Franchisee of the Year is a very special award, not only does it recognise excellence in the core areas of coffee making, product knowledge, product quality and customer service, but also takes into account the participation and involvement of the Franchisee in working with us to improve the Cafe2U brand and system”

For their outstanding achievement, Andrew and Mandy were presented with an all expenses paid holiday to the USA where they will be able to spend 2 weeks on the west coast visiting San Francisco, Los Angeles and San Diego.

The destination was selected by Cafe2U to celebrate the launch of the brand into San Diego, USA in September 2010.