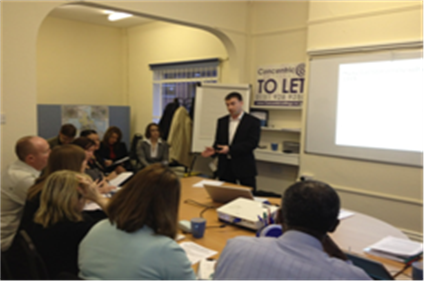 Steve Latham, Managing Director of his own Concentric Lettings Crosby Branch has had a great year. Starting from scratch, Steve attended his training in July 2010 and started trade from November that year.

Steve has taken on the lettings franchise Business owner model and has now grown his branch to include 4 staff, to cope with the volume of lets and instructions he is generating.

Steve has chose a USP of working with LHA tenancies in his area and is quite an expert in this subject now, which has created a great niche for him in Liverpool and Crosby which is where his offices are based.

Since starting to trade, 1 year on Steve and his team have managed to clock up an impressive 115 lets, with the staff now working towards a target of 24 lets per month now, as well as working with helping to solve landlords LHA problems.

1 landlord came to Steve, not having received and money from the council for his LHA tenant for 6 months, Steve’s extensive knowledge of the LHA managed to get the claim moving and he secured £2500, back payment for the landlord, who thought the only resolve was to evict the tenant.

Looking forward, Steve has just employed a "Lister" to maintain his great level of property stock and is looking to move to bigger premises in the New Year.

"Steve has been great, he has taken on board all that he needed to do to make his Branch successful and he has achieved that and more.

"Steve has been that successful with his niche market that we asked him to come and teach the groups some of his LHA strategies this month and it went down a storm.

There were so many great tips and hints, that were so useful to the whole group, everyone was making so many notes, it was brilliant. At Concentric we believe in sharing best practice, to ensure the maximum performance for all.﻿"