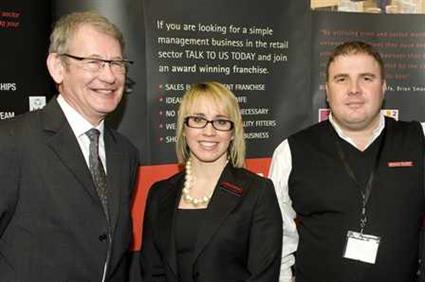 Dream Doors , has again reached the finals of the Franchise Marketing Awards (FMAs).

This year the kitchen franchise made the shortlist for 'Best Website' and 'Best Franchisee Marketing Support' in two out of the five award categories.

Since the first FMA ceremony held back in 2006, Dream Doors has been nominated for a total of 15 awards. Of the previous 13 nominations entered between 2006 and 2010, Dream Doors won four awards and received a special commendation for its recruitment literature.

“We're going to need a bigger trophy cabinet soon,” says Dream Doors Managing Director, Troy Tappenden. “With all the certificates of achievement, as well as the photos of us receiving awards, there's no space left on the walls of our boardroom either!”

He adds: “To reach the finals again is fantastic for me, for the team and for the brand. We must be doing something right to keep on getting nominated and winning these awards!

"Let's not forget, Dream Doors also won the bfa's Brand Builder of the Year in 2008, and we've made the finals in their Franchisee of the Year Awards twice. And to top it off, we were presented with a National Training Award two years ago – an award from outside of the franchise industry – that recognised the impact our professional training courses have had on franchise owners and their staff.”

Tappenden and his management team will be on stand number B01 all weekend. Dream Doors Operations Director and BFA Board Member, Kelly Chambers, will be presenting two franchise seminars, and franchise owners Mike Hurley from Oxford and Roy Easthope from Croydon will also be speaking on franchisee forums.