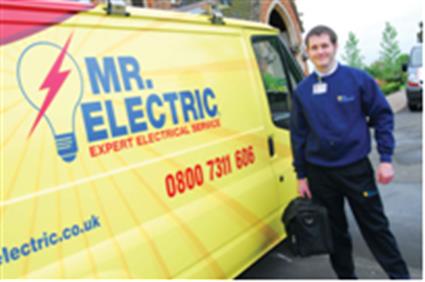 Mr. Electric is supporting the NICEIC (National Inspection Council for Electrical Installation Contracting) ‘MOT Your Home’ campaign, which focuses on showing customers the dangers of not having your electrics periodically tested.

As an NICEIC approved contractor, electrical franchise Mr. Electric recognises the importance of electrical safety. New research from NICEIC has revealed that homeowners are risking their lives by not getting their electrics fully checked, leaving potentially deadly faults lurking in thousands of homes.

Each year there are around 43,000 fires in UK homes, of which over 8,170 are caused by electrical faults and unsafe electrics.

The survey revealed that almost nine out of 10 homeowners don’t think about getting their electrics fully tested, with 88% confessing that getting their gas boiler checked is more important to them. Worse still, over a third admitted they have never had the electrics in their home fully tested.

That’s why NICEIC has launched ‘MOT Your Home’, a national consumer safety campaign warning homeowners about the dangers of electrical DIY.

Mr. Electric fully supports the campaign, as it is a continuation of our own commitment to electrical safety. The company consistently communicates the importance of electrical testing and electrical safety through their website.

The 'MOT Your Home' campaign by the NICEIC is fronted by home-improvement expert Linda Barker. The campaign encourages homeowners whose property is over 10 years old to employ a registered electrician, like Mr. Electric to carry out a PIR (periodic inspection report), which acts like an MOT for the property.

Linda Barker says, “I’ve teamed up with the NICEIC to encourage consumers to get their homes checked and make electrical safety a top priority. Even though it’s tempting to try and save a few pennies where possible at the moment, a simple home MOT could save lives.”

Homeowners polled by NICEIC ranked their top priorities in the following order:

Tony Cable from NICEIC adds, “Nearly half of homeowners admitted to asking a friend or partner to have a go at electrical work in their home. This means there are potentially deadly underlying electrical problems in homes across the UK as a result of botched DIY jobs.

“The NICEIC campaign aims to change the public’s mindset about getting their electrics checked by a registered electrician, in order to keep their home and family safe.”

Mr. Electric can offer a PIR which will let homeowners know about overloaded electrical circuits, potential hazards in the installation and identify faulty DIY work.

Homeowners will then receive a report which details the overall condition of all their electrics and points out any work that might need to be carried out.