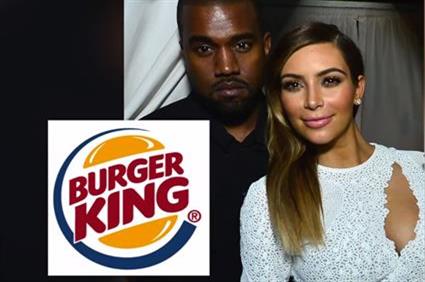 Nevertheless, that’s just what Kanye West presented to his intended, Kim Kardashian, as a pre-nuptial gift earlier this year.

The rapper purchased ten European franchises (he now owns Burger Kings in the UK, Italy and France) and feels that the business venture is perfect for Kim when she finishes with reality TV.

Doing business in the fast-food franchise industry isn’t new to the R&B rapper – in 2010 he gained the franchise rights for ten Fatburger restaurants in Chicago via his holding company, KW Foods LLC.

And Kanye isn’t alone – several US celebrities have jumped on the fast-food bandwagon in recent years.

Singer and hip-hop producer Pharrell Williams has opened several Fatburger restaurants in China whilst Magic Johnson, NBA star and member of the US “Dream Team” in ’92, was one of the owners of the parent company.

Other famous fast-food franchise junkies include tennis legend Venus Williams, who has put her name to four Jamba Juice outlets in Washington; NFL poster-boy Peyton Manning who owns 21 Papa John’s pizza restaurants in Denver; golfer Phil Mickelson who can’t stop talking about his love of Five Guys Burgers and Fries; and musician Rick Ross, who even raps about his franchise-owner status: ‘Wingstop owner, lemon pepper aroma..’ and now owns eight of the chicken restaurants in the southern states.

So what is it that attracts American celebrities to fast-food franchises?

Firstly, they’re established, lucrative brands so busy celebrities with more money than time can invest without having to think about the business nitty-gritty of starting from scratch.

Britney Spears and J.Lo both had a bash at setting up their own restaurants – named Nyla and Madre’s respectively – but they quickly folded as the singers just didn’t have the time or business know-how to make them work.

The British Franchise Association (BFA) say that “between half and two-thirds of all independent start-ups close within their first 3 years,” which, in is in stark comparison to figures showing that 90% of franchises are currently reporting profitability each year.

Secondly, celebrities know that with their endorsement the franchise will only do better – a brand-on-brand marriage means a very low risk investment.

Thirdly, celebrities are usually offered better rates, and often have their franchise fee waived altogether due to the obvious value of their endorsement.

And why aren’t UK celebrities investing?

Despite all these dangling safety nets, British celebrities haven’t exactly been lining up to get in on the fast-food franchise deal.

Here at Franchisesales.com we think they’re missing out. And it doesn’t have to be only burger joints – the franchise industry has a wealth of other business types to get stuck into.

The fact that most of the American celebrity franchisees are into fast-food lends itself to the misconception that most franchises available are exclusively within that sector.

Whilst the industry was once dominated by the likes of McDonalds and Subway, this is no longer the case. In the FranchiseSales.com directory, only 5% of its opportunities make up fast-food restaurants.

According to the BFA: “Franchising has since flourished into an industry which now has nearly 1,000 brands in a multitude of different sectors. Long-gone are the days when it revolved around cars and catering, and nowadays it’s [an] eclectic mix of businesses.”

What types of franchises could British celebrities be missing out on in the UK?

Despite the obvious draw of the fast-food big-guns, there are some successful franchises in other sectors that the potential celebrity franchisee should take a look at. Here are some of our fantasy pairings:

Rebecca Addlington: Sports
With 2012 a not-too-distant memory, the sports industry is still booming. According to a ComRes poll by the BBC last summer, 11% are exercising more as a result of the games, increasing to 24% for those aged 18 to 24. So investing in a franchise like Sport Works or Progressive Sports could be the next career step for retired Olympic gold medallist Rebecca Addlington. Not only would she still be involved in the world she loves, but could make a difference in helping children and teenagers reach their full sporting potential.

Nick Knowles: Building Maintenance
Known for presenting DIY SOS where they rebuild homes of those that desperately need but can’t afford it, Nick Knowles not only immerses himself in building work but philanthropy. He would feel at home endorsing Rainbow International a restoration and cleaning franchise. Dealing with disasters such as floods and fires, the franchise restores and cleans properties up to their former glory.

Alan Titchmarsh: Gardening
Green-fingered Alan Titchmarsh has hosted a variety of horticulturally-related programmes, including the hugely successful Ground Force. Becoming a garden franchisee would be a great next step – particularly with Green Thumb or Envirocare. These garden maintenance franchises are fast growting business with a potentially high turnover.

Aggie MacKenzie and Kim Woodburn: Cleaning
The How Clean is Your House presenters Kim and Aggie can spot a dusty sideboard in an instant, but could they have an eye for business too? Successful cleaning franchise, Maid2Clean would be a perfect fit – for more than 19 years it has provided over 2.5 million cleans to private residential homes. Through an initial investment of just under £10k, they could be franchisees making a fast return in a growing market sector.

Kirsty Allsop and Phil Spencer: Estate Agency
Location, Location, Location’s Kirsty and Phil are constantly playing the position of estate agents, yet if they were to put their names to a lettings franchise they could make a great return. Century 21 UK is the world’s largest estate and agency network, comprised of approximately 102,000 agents in 77 countries. With property transaction numbers steadily rising and mortgage lending on the up, the time to become a lettings franchisee has come.

So, whilst state-side celebrities are putting their hard-earned cash into fast-food franchises (and for good reason), we feel that their UK counter-parts could take the initiative even further and branch out into the many other opportunities within the industry.

After all, we can’t all be flipping burgers like Kanye.