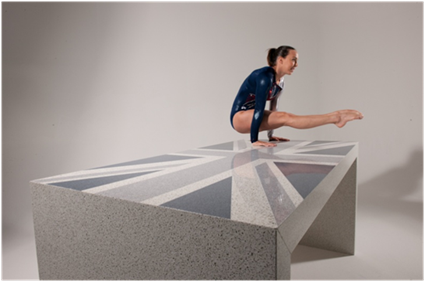 It then invited Britain’s top gymnast, Beth Tweddle, to show off its patriotic piece by performing a series of rhythmic routines on and around the unit.

As a test of the material’s strength and resilience, Beth’s energetic vaulting, tumbling, jumps and acrobatics put it through its paces, although Granite Transformations would expect far more severe treatment in normal household and commercial use.

Made from post-consumer recycled wine, beer and mineral water bottles, with an element of polymer resin for strength and a patented Flexiweb™ backing for flexibility, it outperforms most other finishing materials like natural or engineered stone and solid synthetics.The unit could be used at home in a sizeable kitchen, sports club, recreational centre or licensed premises.

Three-times World, six-times European and seven-times National champion, making her Britain’s most successful gymnast of all time, Beth Tweddle was photographed in a state-of-the-art infinity studio that allowed the full height and breadth of her fantastic gymnastic feats to be captured.

Tweddle was suitably impressed with the one-off Union Jack unit and took time out to admire the kitchen franchises' iGranite app, which previews how its range of worktops could look in any kitchen.