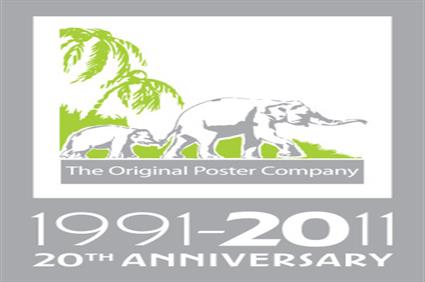 On the 7th February 2011, The Original Poster Company will be celebrating its 20th Anniversary which is a huge milestone for any greetings card company and is testament to the owner’s belief back in 1991 that a new company could start during an extremely tough recession and really succeed thereafter.

Mark Thompson, the greeting card franchise Managing Director, says ‘’Simon Warren-Gash started this business 20 years ago initially with some posters and one small range of greetings cards called Animal Magic. Embracing Simon’s passion and enthusiasm, retailers stuck with their early OPC displays and enjoyed the benefits of a monthly service call and no investment in their stock.”

“By 1993, the whole of the UK and Ireland was being serviced by an inspired team of OPC franchisees each with their own territory, servicing retailers on a consignment basis with an ever improving range of greetings cards. By only paying for the cards sold and receiving a freshly merchandised card display each month, what was there to lose?”

“Backed by an excellent OPC team and a proven business model, Simon’s attention turned to markets overseas. Entry into France proved hugely successful and was the start of OPC’s International Master Franchisee network and development into new greetings card ranges.”

“Today, we have 74 franchised territories covering the UK and Ireland and franchised distribution in 10 other countries, with many ranges of cards and ancillaries for all seasons and occasions. With a can do attitude, together with product ranges and a service model that works, we all look forward to enjoying the next 20 years!’’

The OPC team will be celebrating with all of their UK and Irish franchisees during their Regional Meetings in March and to further mark their significant anniversary, four separate charities will benefit from donations totalling £20,000.