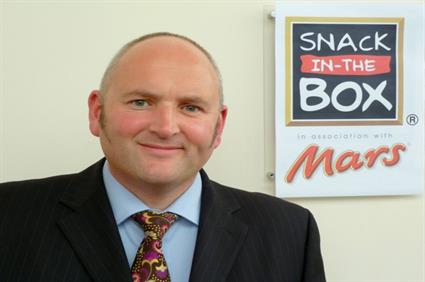 And while the delivery franchise has grown into a 100 strong franchised outfit, the very same principles that made its self-service boxes profitable back in 1991 continue to do so today.

With an 'honesty' box there is no personal contact with a vendor at the time of purchase, nor is there a mechanical vending process in place. Customers are relied upon to leave the correct change in return for the tempting snacks on offer.

“Many people ask me whether customers really do put the money in the box,” says Snack-in-the-box Sales Director Matthew O'Neil (inset). “They seem genuinely surprised that an honesty system works in this day and age. But it is important for them to understand that, in building a business that has been successful for the best part of two decades, we introduced a number of systems and controls  that reduce theft from our franchisees.”

He adds: “Most customers are decent, and they are honest enough to leave the exact amount in a fair exchange for the snacks they take away. In reality, newsagents and food retailers suffer far greater losses from shoplifting than our franchisees, and we have a number of ex-newsagents and shop owners within our network who can testify to that! We also have franchisees that are well into their third term; people that have been successfully trading for more than twelve years. And why would anyone want to stay in business for that long if that business didn't work?”

Snack-in-the-box franchisees deliver boxes packed full of popular snacks to small to medium sized businesses of less than 20 employees. They return a week later with a freshly packed box and take away that week's cash takings. There are no contracts, no security cameras, and no cashier to ensure the correct money is left.

“This is a very simple cash business that relies on trust,” says O'Neil. “The businesses we deliver to love our service because we keep their employees on site, and they prefer that than seeing their employees wander off for mid-morning and afternoon snacks.

"Those same employees love our service because we make it convenient for them to buy the best chocolate, confectionary and crisps. And because they love the service we provide, they want it to work. In the smaller work place if someone abuses the system generally everyone knows who it is. So the collective honesty of the group often prevails.

"They tend to govern any 'would be' light fingered abusers as the rest of the staff don’t want to lose the service. Yes, put this Box on a factory shop floor and it would be financial suicide, you would be lucky to get your box back, let alone any chocolate or cash! But in the smaller work place it really works. Put simply, we are vending from a self service Box.”

Professional canvassers from Snack-in-the-Box help franchisees source their first 150 customers. But it is the rapport that is then built up between those franchisees and their customers that ensures each site remains profitable. “I love meeting my customers, spending time chatting with them and knowing they appreciate seeing me every week,” says Cleveland Based Snack-in-the-Box franchisee, Debbie Shrimpton. “They know that this is my business, and that if they were stealing from my boxes they would be taking money from me, not from some huge corporation. That's the honesty box policy, and it works. And let's face it, Mars wouldn't put their name to something that doesn't work either!”

Every year, Snack-in-the-Box donates a significant sum to help the NSPCC, and this charitable contribution is highlighted on the 'honesty' box itself. Franchisees acknowledge that, altruism aside, this also serves as a control to keep customer's morals in check. “There aren't many people that would be comfortable stealing money from a children's charity,” says Northamptonshire based Snack-in-the-Box franchise, Vitor Reiss who started his business earlier this year after moving to the UK from his native Portugal.

“People often assume our takings are going to be short,” he adds. “But, because people don't always have the exact change, they can often be a little bit over! What's great about this business is we took an income from day one. By the end of our first year we'll have made a profit of between £25,000 and £30,000, and that's after paying all of our bills.”