“I have been blown away with Cashbrokers level of training” 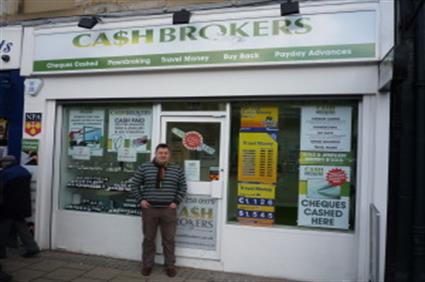 Dave Davidson and his business partner, Steve McIntyre, have been in franchising together since 1990 when they opened their first, The Body Shop store in Scotland.

When The Body Shop decided they would no longer franchise businesses, David and Steve were faced with the challenge of finding the right franchise within the right industry.

They moved into the property sector, unfortunately the industry took a nosedive and the recession hit business hard. It was after this setback that they wanted to ensure the next business had the substance to trade both in and out of a recession.

Dave commented “We had kept an eye on the Pawnbroking industry over the last couple of years. We both felt it would be the next avenue for us to go down and especially as it was proving to thrive in a recession”.

“We sent away for a Cashbrokers brochure, having digested the information we were still a bit cautious as neither of us had been involved within Pawnbroking before. It wasn’t until I received a follow up call from Alan at Cashbrokers, who I was really impressed with, that I decided we should be taking this opportunity further” continued Dave.

Having had a successful franchise with The Body Shop Dave and Steve both knew how important it was to build a solid relationship with the franchisor.

“When we first met, Paul, Robert and Alan at Cashbrokers head office we knew we would be able to work within their open and honest environment which engulfs the Cashbrokers franchise” commented Dave.

“After the initial meeting with Cashbrokers, we were both really keen and wanted to see more, we went and visited some of the existing franchisees, it was at this stage we both thought, we like this and we want to be part of it” continued Dave.

“We opened two stores, one in Portobello, Edinburgh and the other in the city centre in Edinburgh. You have got to be hands on and really get to know how the business works. It is fascinating and very enjoyable now that we’ve got a good grasp on it. The training has been exceptional; I have been blown away by the level of training and support” commented Dave.