Mac Tools - It's a family affair 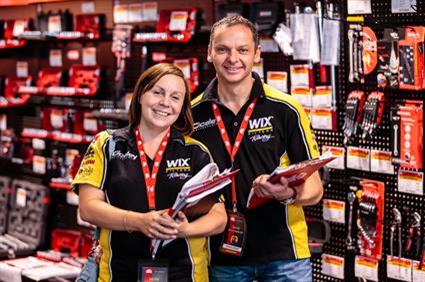 One of the UK's leading suppliers of automotive, manufacturing and engineering tools, Mac Tools is going from strength to strength. And enjoying the benefits of its attractive franchise package are a number of happy franchisees who are inspiring relatives to join the Mac Tools family.

The Mechanics Tools and Forge Company was founded in the USA in 1938, by 7 men with a common goal - ‘to manufacture the finest tools in the world’.

On July 11, 1938, they were officially recognized after signing the Articles of Incorporation, with the state of Ohio issuing 250 shares of no par common stock. However the men could only afford to subscribe to 55 shares.

After managing to secure a building and purchase used machinery at the grand sum of $5,000 they began production, and it was a great success. In a time of austerity, the company prospered landing a US government contract.

In 1945 the company became Mac Allied Tools, and the nickname ‘Mac Tools’ was born, later adopted as the official brand name.

The year 1990 saw the first Mac Tools franchise in the UK, and since then they claim to be ‘the number one choice for professionals all over the country’.

Worth £7 billion and with over 30,000 employees worldwide, Mac Tools specialise in the distribution of tools to car dealerships, automotive repair shops, manufacturing units and engineering companies.

Influenced by family members, an increasing number of new franchisees are joining the Mac Tools network after seeing their partners, friends and family members reaping the benefits.

Adrian and Kate Griggs, are just one of the Mac Tools couples 'keeping it in the family'. When Adrian took the opportunity to become self-employed with a Mac Tools franchise, his wife fully supported him – and within a year she had taken on a franchise of her own.

Previously a teaching assistant, Kate started to join her husband on his rounds in her spare time, gaining valuable hands on experience.

She soon made the decision to follow Adrian’s decision when she noticed the positive effects:

'This experience and knowing how life-changing it had been for him, was what spurred me on to take on a Mac Tools franchise myself. He was enjoying his work in a role that he found fulfilling and was well and truly on the road to financial success.'

Having his wife join him in a Mac Tools Franchise has also been worthwhile for Adrian as they can ‘bounce knowledge and ideas off each other’ share information and combine resources.

But it doesn’t go without a bit of martial rivalry - they find it motivational to see each other’s successes, arguing that ‘a bit of healthy competition is great for our businesses’.

It’s not only couples sharing in the success. Andrew Mellis followed in his father in law’s footsteps, and likewise, John Booth followed his dad’s in taking on a Mac Tools franchise:

'My dad has been a Mac Man for around five years, … I’ve seen it first-hand … It gave me a great insight into what is involved and what can be achieved before taking the leap.'

The family connection is proving to be an added bonus for many as they benefit from insights into success and mutual support.

Could you be a Mac Man or Woman?

Mac tools currently employs 120 franchisees (aptly named Mac Men and Women), and services approximately 180 automotive locations within the UK with a potential market for £150 million. Gross profits range from £50,000 - £75,000 in one territory.

The franchisees are provided with a fully equipped van, stocked with a selection from their vast line of over 18,000 professional tools.

According to Mac Tools, franchisees are  ‘allocated a territory, with a database of all the known automotive relevant outlets within it’ enabling them to  ‘sell directly to customers by calling into their workshops on a regular and reliable basis’ at a 100% profit , as there is no charge for ongoing royalties.

Buying into a pre-existing, well-established and successful business model is also another plus of buying a franchise - and the Mac Tools support network is something highly credited by their investors:

‘I never imagined the level of support I would get, not just from my step-father, but from everyone who works for Mac Tools’.

Over the last three years Mac Tools have achieved a 25% year on year growth, a great result considering the current market.

Could you be a Mac man or woman? Take a look at their franchise opportunity at FranchiseSales.com

Melanie Luff Editor
Mel wrote for all titles in the Dynamis stable including BusinessesForSale.com, FranchiseSales.com and PropertySales.com as well as other global industry publications.