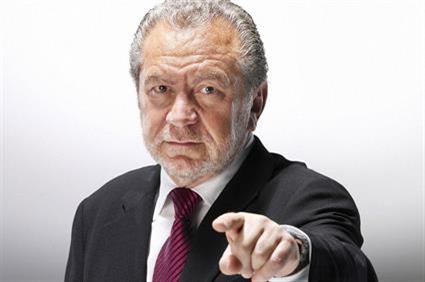 Not always right on business (courtesy of Amstrad)  Alan Sugar got it wrong when he declared that an “entrepreneur” was impossible to define or create.

Way off the mark

David Abingdon, CEO of the Alchemy Network, a B2B franchise, and former head of the Quantum Organisation and Insurety PLC, said that Sir Alan’s negative reaction on the BBC1 show The Apprentice – in which he said he wanted to “bop” people who asked him what made an entrepreneur and that it couldn’t be explained – was way off the mark.

David, who was profiled by The Guardian as one of its Serial Entrepreneurs and who has appeared on the BBC’s Money Programme, BBC News and the Sunday Times as a business commentator, has spent the past 15 years as the 'business consultant’s consultant' and has trained in excess of 3,000 people from all walks of life and from around the world in business management techniques.

And he says that not only can you define an entrepreneur but you can harness a person’s skills and drive to train them to become one.

“I think it’s easy to say what an entrepreneur is. It’s someone who can create something from nothing in business terms, whether it is a business start-up or turning around a small or faltering company.

It’s about seeing and recognising opportunities that others can’t, taking risks and being willing to put themselves on the line, where failure is not an option and where there is no plan B, because planning for a way out is planning for failure and is therefore self-defeating.

"Entrepreneurs are optimists and builders who display determination and commitment to get the job done and achieve success.

“Also, what drives an entrepreneur is the need to improve and prove themselves. It’s no surprise that the majority of successful entrepreneurs come from humble backgrounds.

"As a result, they have a huge drive to prove themselves to others as well as themselves. In that way, entrepreneurs are created because they are driven from where they came from to better themselves, driven towards the elixir of success.

“What the Alchemy Network does is to use its study and understanding of the elements that make a entrepreneur; who they are, what they do and what they wish to become, and harness that hunger and passion for success and give it a laser beamed focus

David Abingdon is an entrepreneur who rose from a council estate in a tough part of Birmingham to run a number of multi-million pound companies and own a country estate. His business development consulting organisation, The Alchemy Network, supports and trains consultants to assist companies to become more successful.

He explains how the principles of being a successful entrepreneur can be, in fact, be taught. “You can’t give people the hunger, but if you introduce people to the principles of how to succeed, both in their own companies and for others, and help them to understand how they should act and behave, then there is no reason why they can’t emulate the performance of high performing entrepreneurs.

"But integrity and honesty are also key; without these it is a sham. They promote a lie and get found out.”

The same techniques and systems used by David to build his own businesses, and help others to do the same, are now available through Alchemy Consultants around the world - and can assist most businesses in increasing sales, customer numbers and bottom line profitability.