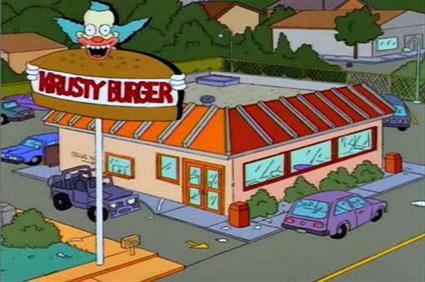 The Krusty Burger burger chain opened its Springfield branch in 1991. Founded by one of the most brilliant TV creations of all time – Krusty the Clown, the morose and unpleasant TV star has not always been as successful with his business as he would have liked.

Krusty Burger has the dubious honour of being named ‘the unhealthiest restaurant in the world. Krusty Burger’s other notable failures include the creation of the ill-fated 'Mother Nature' Burger – a vegetation burger made from poisoned barley.

But you can’t fault Krusty for his inventiveness – Krusty Burger had a huge menu, including such delicacies as the Whatchamacarcass Sandwich, The Clogger and Twisted Lard. It was also - incredulously - hugely successful, with thousands of US outlets and a Paris branch.

In the critically acclaimed TV series Breaking Bad, Los Pollos Hermanos ('The Chicken Brothers) serves the best fried chicken to the residents of Albuquerque and beyond

Set up as a cover business by drug kingpin Gustavo Fring, the name refers to the close brother-like relationship Gus has with his franchise partner– Max Arciniega.

In fact, the fried chicken recipe used in the successful chain was created by Max Arciniega – an expert at addictive batter and other recipes, with the vats of batter also acting as meth smuggling barrels. Los Pollos products are so good that Gus manages to bribes the cops with free fried chicken.

With 14 franchised restaurants in Western US, according to Breaking Bad lore,  Los Pollos Hermanos served as an example of a sterile Americana full of drive-thru restaurants in isolated places.

With many franchise outlets in California, Double Meat Palace requires employees to wear a stunningly awful uniform of red and white stripes and a ridiculous chicken hat.

But as employees start disappearing Buffy becomes convinced that the ‘secret ingredient’ in the meat may actually be human meat.

The Doublemeat Palace seems to attract customers even crazier than the staff – including the notorious wig lady who spritzes paralysing fluid into employees’ eyes…before eating them. But in the end – the Doublemeat Medley burger is found to contain only processed vegetables – proving why this makes the list as a fast food franchise selling the world’s most delicious veggie burger!

Moving up in the world from selling cigarettes, milk and film rentals at Quickstop convenience store in Clerks, its sequel sees perennial slackers Randal and Dante behind the counter of a branch of Mooby’s - the fictional fast food chain seen across a number of Smith's films.

Mooby’s shows an easy slackers life of tossing burgers, serving fries, and the odd bit of nail polish application. It makes this list due to the camaraderie associated with fast food – these characters seem to genuinely enjoy their jobs – especially when hurling abuse at customers.

This branch of Mooby’s - with a drive thru and a huge parking area - was actually an old Burger King converted for the film.

McDowell’s is owned by Cleo McDowell and his daughters, Lisa and Patrice. McDowell spends most of the film trying to show how he hasn’t ripped off the McDonald's Corporation – but with dishes on his menu like the "Big Mick" he’s not very successful, cleo is even seen reading a McDonald's Operation Manual in one scene.

In reality, McDowell's was an operational Wendy’s, located in Queens, New York. Sadly this Wendy’s closed in 2013 as is to be demolished – a final goodbye to the Golden Arcs.