Vending Franchise For The Long Run 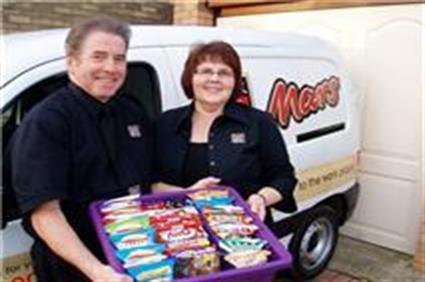 For Sussex based husband and wife team, Ruth and Philip Sutcliffe, it is the financial rewards, as well as the freedoms associated with self-employment that they enjoy most about their Snack-in-the-Box (SITB) Self Service Box delivery franchise.

Now, ten years after they joined the Mars branded snack vending franchise, the Sutcliffes have recently re-signed for a third term of their Franchise Agreement.

“Snack-in-the-Box is the perfect business for us, and I can't see us doing anything else,” says Ruth. “There's nothing out there that could make us this sort of money for the time spent in the business. And there will always be a demand for SITB's 'honesty boxes'. For me, the best part of this business is its flexibility. I look after the paperwork which I can easily fit around our family commitments. My husband, Philip, does all the rest!”

She adds: “I was a nurse and Philip worked in farming before we did this. But we both wanted to be self-employed. And we definitely wanted to take on something that was proven. At that time, Snack-in-the-Box had been franchising for a few years, so we could see that the business definitely worked, and we immediately felt at ease with all of the management team.

"They are a really friendly bunch and, although we don't need their help as much now, it's nice to know that they are there if you need them. This isn't a complicated business anyway, and it really is easy to understand. So long as you follow the methods that SITB has set up, this can be built into a very successful, and long-standing business.”

West London franchisees, Peter and Christine Cox, have two SITB franchises and have been with the brand for over a decade. Initially, they ran the Self Service Box Franchise together. Then, when their eldest daughter, Michelle, was old enough to join them, she was able to help Christine run the Box business.

This freed up Peter's time so that he could expand their business and, by taking on the Compact Vending Franchise for himself to run, he has fulfilled his dreams of owning a family run business. “Snack-in-the-Box has given us exactly what we wanted from a business,” he says.

“Michelle joined us part-time after leaving school, and she now spends all week out in one of our vans. We decided to split the business so that I deal with the vending sites, and Michelle handles all the boxes. That way, I can be out four days a week in the other van, while my wife, Christine, looks after the administration and packs the boxes for Michelle.”

The Coxes started out 11 years ago with just one van and now, with a little help from the Head Office based canvassing team, have added more than 100 vending sites to their customer portfolio. Says Peter: “Business is really good at the moment, and we are flat out five days a week.

"I'd rather that than struggle to generate business, although, in reality, finding customers has never been a problem for us! I sourced most of the box sites myself, but we have used SITB's own canvassers to help us win even more vending customers.”

He adds: “We love the independence in this business, and I could never go back to working for someone else. And there is no way we could find anything else that sustains all three incomes, and gives us the flexibility of being our own bosses.

"Michelle is only 30, so we have many more years to give. I can see us signing for a fourth term and beyond. This business has longevity, and we are definitely with Snack-in-the-Box for the long term.”

Maurice Hemmingway and his wife, Sandra, are in their third, and for them, their final term of the Franchise Agreement. But it is age, and for no other reason, that this term will be their last. “We launched our Self Service Box business in 1999, and I'll be 62 next year,” says Maurice.

“At the end of this agreement I'll be 65, so it will be the perfect time for us to sell-up and retire. Not that it will be easy though, as we've built a great little business here. And the rapport that I have with my customers is something I'm really proud of.”

“Snack-in-the Box is everything we thought it would be, and we definitely made the right decision in joining” he adds. “What's most attractive is that this is a cash business, with nothing hidden or complex about it.

"Being financially secure enough to support our children was a key factor in us buying this franchise. And we've made a really good living out of it. In fact, Snack-in-the-Box helped put our daughter through medical school!”